In today’s world, what happens online can have very real repercussions at the ballot box, in parliament, and in society at large. The division between online and real-world politics is blurred, if not entirely dissolved. Engaging with the digital is a must in today’s campaigning landscape. That often means investing budget into some kind of digital advertising.

But as an organization engaged in the justice-seeking space, it can be hard to know where to put your restricted budget. If you’re considering putting money into digital advertising, Facebook is often a good place to start. More than 19 million Canadians (out of our population of 37 million) have accounts with Facebook, and over 14 million of these check their Facebook news feed every day.

It’s a platform that is not being ignored by the political parties in Canada during this 2019 election season. We took a look at how each of the 4 major parties are spending their hard-earned fundraised cash over on the now-public Facebook Ad library to learn about the campaigning tactics that you should consider for your next Facebook ads campaign.

While there isn’t a one-fits-all answer when it comes to strategizing around communications, there are a few tried, tested, and true tactics that are more likely than others to work. Here are 4 campaigning tactics from the 2019 federal election which you need to incorporate into your next ad campaign.

The Liberal Party of Canada: The Video Ad

The Liberals are 2019’s incumbent party and have the most to lose this election season. The dollars are coming out: The Liberal party is a close second to the Conservative on ads spend, having spent $426,197 as of October 1, 2019.

The Liberals decided to create an assortment of video ads to highlight the key planks in their policy platform: the boost to the Canada Child Benefit, a tax cut for the middle class (while not cutting taxes for the wealthiest), reducing plastic pollution, and their first-time homebuyers benefit. Out of all of the parties, the Liberals are making the heaviest and more varied use of video in their Facebook ads. The Liberals make heavy use of the charismatic Prime Minister Justin Trudeau in their video ads. These feature Trudeau in a variety of contexts, including riding the bus, hiking up a mountain, and sitting at his kitchen table.

Making videos takes more planning and work than an image, but can perform much better than static images. The Liberals have clearly discovered that video works much better for their target audiences. If you’ve also generated milquetoast results with your static image ads, a video ad may be a great next test for your ad campaign.

Videos are now cheaper and easier to create than ever, and the technical skills needed to create them are often within reach for many organizations. What makes a video ad great is similar to what an image ad great: good storytelling which conveys your message in a compelling way.  Seeing as the Liberal Party of Canada has invested so much into video ads, it might be worth your while to put in the extra effort as well.

The Conservative Party of Canada: The Targeted Ad

The Conservatives, much like the Liberals, are investing in several different ads highlighting their key policy planks. However, they are not running as many video ads as the Liberals in the month of October to convey their policy positions. Looking through the ad library, the Conservatives seem to have experimented with video ads, and phased them out to use a picture of Andrew Scheer’s face captioned with Conservative policy planks: 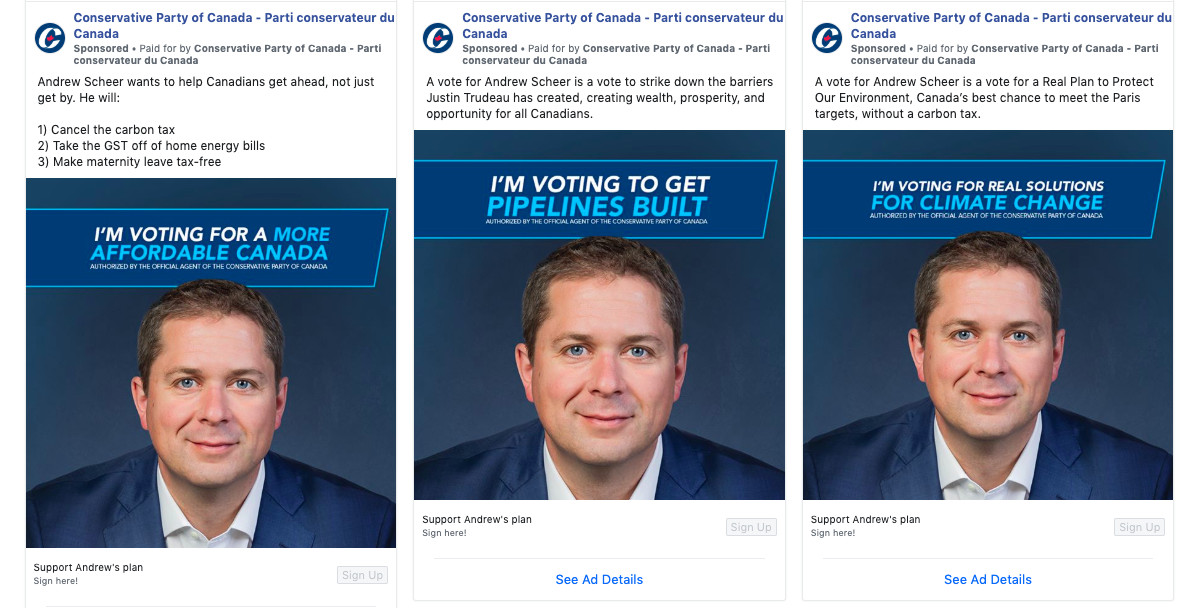 But the most interesting aspect of the Conservative Facebook ad strategy is it’s ultra-targeted ads.

Take these two ads below. One celebrating the Philippines-based fast-food chain Jollibee, geared towards immigrant professionals and small business owners: 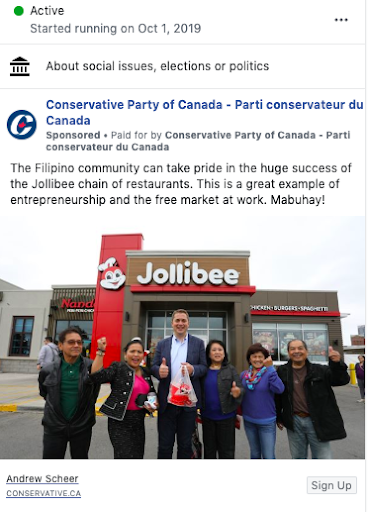 Another ad promising investment in the George Massey Tunnel, which is located in the greater Vancouver area: 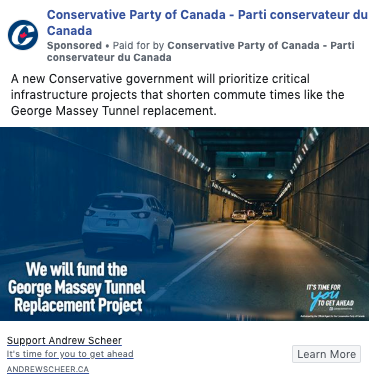 Your Facebook ad is facing a lot of competition. Not only does it need to distinguish itself from other Facebook ads, but it also needs to stand out against a Facebook feed full of fun and highly relatable content. A well-targeted ad is much more likely to strike a chord since it can speak directly to difficulty or struggle that a person is personally experiencing, and therefore feels most strongly about. In other words, a well-targeted ad can be as relevant as other items on the user’s Facebook feed, if not more. This increases the chances that the person will pause in their feed and look at the ad more closely, and click to find out more.

The Conservatives are competing for ridings in the Greater Vancouver Area and for immigrant voters, and they’ve chosen to try to win these over with highly-targeted ads. While these ads will fall on deaf ears for a larger proportion of people, they will speak intensely to the target segment. That is the trade-off with highly-targeted ads: you will be giving up on general appeal for strong niche appeal.

Campaign Gears has found that this tends to be a winning strategy. The more targeted and tailored your messaging and audience can be made, the better results you will see in terms of conversions, funds-raised, and click-throughs. Even incrementally targeting your ads can yield important improvements to your campaign. Another important benefit is that your dollars will go much further. Rather than waste money advertising on those who are indifferent to your message, your targeted ad will be shown to those who are more likely to care enough to take action. In the context of a political campaign, that often means that you’ll get more results with the same ad spend when compared to a more generalized ad targeting approach.

The NDP: The Attack Ad

The NDP has invested significantly less than the Conservatives and the Liberals in Facebook ads. The NDP has decided that much of the over $200,000 they’ve put into Facebook ads since the summer should go towards running attack ads.

Attack ads highlight negative aspects of another party, which allow contenders to seem more impressive by comparison. The NDP are more likely to sway Liberal and Green voters, and most of its video ads incorporate some kind of criticism against these parties. A minority of these attack ads criticize the Bloc or the Conservative party.

For instance, the NDP was running a series of french videos outlining their key policy planks which ended in some criticism of one of the competing parties: 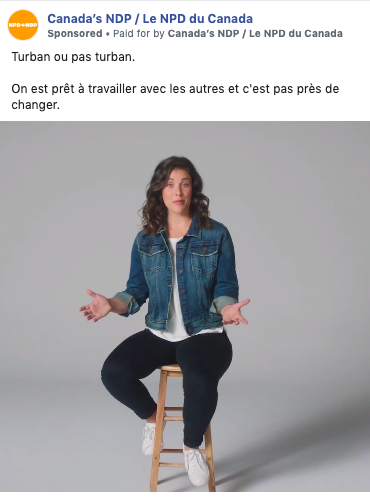 The NDP is in a difficult battlefield in Quebec, and needs to be aggressive to retain seats in the province. Studies have shown that attack ads are an effective way to sway opinion away from your contender and towards yourself.

The NDP’s main competition for votes is the Liberal party. The NDP is at a disadvantage on several fronts. First, it is a third party which is often not considered a realistic option, so it needs to insert itself forcefully in the conversation. Second, it is competing with an incumbent party whose leader is from Quebec. These factors may explain why the NDP is deploying a heavy arsenal of negative attack ads against the Liberals in particular.

When considering whether your organization should use attack ads, you should take several factors into account. First of all, be wary of who you are attack. If you’re viewed as more powerful or influential than the entity that you are attacking, this may create a negative image for your organization. Second, be attentive to not always be using attack ads for all of your campaigns, as they may cause your audience to associate your with negativity. This is a problem that unions often run into, since the public often only hears from unions when they are fighting demands for concessions from the employer. However, with care, attack ads can be an effective part of your campaign.

The Green party’s budget is even more restricted than the NDP, and they have only spent some $20,000 since the summer on Facebook ads. The Greens understand that they are likely to get more votes from a younger demographic. You can see that their ads attempt to appeal to this younger demographic through the use of emoticons and counter-culture behavior (May being arrested). The tone of the ads also speaks to a younger demographic with its looser grammar structure. 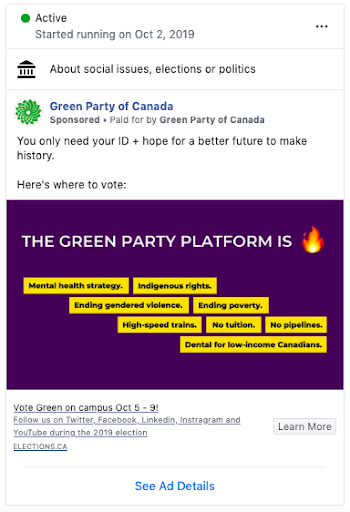 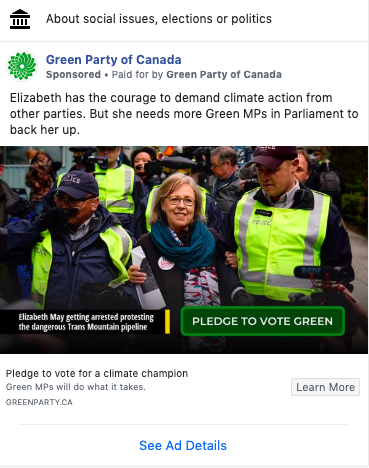 The youth demographic is coveted by many nonprofits and unions because younger people tend to be more progressive than those who are older. If you are looking to run a campaign and want to target a younger crowd, keep in mind that these folks have grown up using the internet. They are very attuned to internet irony, language, and acronyms. Like the Green party, you may find that your ads convert more highly when they adopt some of these internet morays into their creation. Hiring a person who is familiar with the online space can help ensure that your ads come off as natural and not “trying too hard”. The Green Party Facebook ads have done a good job in achieving a youth-appealing tone.

Facebook ads involve a lot of trial and error. Looking at the ads from the parties this year, it’s clear that many were created, tested against different demographics, and ultimately retired. That same amount of testing will have to go on with your own campaign. However, we hope that this blog post gave you a few promising starting points for your next Facebook ad campaign expedition.