The Ontario Nurses Association (ONA) has become a fierce voice for nurses lobbying for safer work conditions and an increase in nurses on shifts. Since 2014, the largest union representing nurses in the province, has been working to increase the political engagement of its membership. Whether it be anti-conservative, provincial election campaigns or building engagement tools to reach out to legislators online — Campaign Gears has been there to help.

A key part of building a more active union has been to foster an understanding of member mobilizing amongst the staff. Using an organizing system allowed the team to track member engagement in a comprehensive way. Onboarding to NationBuilder we were able to create a system of lists and filters that the ONA could easily update and track.

The ONA has leveraged this kind of outreach to campaign messages on time-sensitive issues about staffing shortages, workplace violence issues and the importance of using registered nurses.

Union leadership has been able to assess the level of support of their membership. The insightful reports help target and redirect resources towards problem areas. Strong leaders within the membership have been identified and fostered. Being able to find key members has allowed the ONA to build internal leadership at all levels.

In April 2016, Campaign Gears worked closely with the ONA on an organizing vote in Kingston, Ontario — all within the NationBuilder eco-system.

As a key contribution to the strategic discussions of winning this membership vote, we determined the campaign needed an interface for the team. ONA members needed a way to engage with the data on a daily basis. By seeing the big picture and how their daily engagement was moving them closer to their goal they would be able to build energy on the campaign trail.

Campaign Gears built a custom report to display the campaign details in printable wall charts This helped the group discuss campaign progress and target their efforts most efficiently. We were proud to be part of the ONA team that won the drive with more than 70% of the vote.

Unlike the tech sector, unions have a huge learning curve when it comes to understanding the bridge between data-management and on-the-ground organizing. They are professional offline organizers and have lobbied the Canadian government to protect workers delivering huge wins.

However, their instinct is to stay offline. At Campaign Gears, our team doesn’t see the divide between on and offline; we bridge the gap between the traditional, timeless community organizing model and new, savvy, online engagement tactics.

The journey we’ve been able to take with the ONA has been one of our longest projects. Their work has grown by leaps and bounds as they begin to embrace data and digital into their already perfected organizing models. 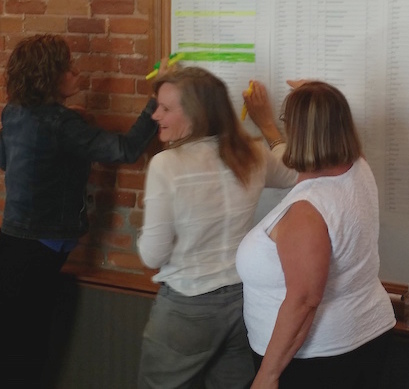