Ladder of Engagement: Part One

What started as a discussion paper in 1969 by Sherry Arnstein has now evolved into a simple, key concept that graces every organizer training. The Ladder of Engagement, or pyramid if you prefer, is the ideal model of bringing outliers into a campaign, organization or cause and moving them to become more deeply engaged.

With increasing responsibility comes an increased sense of ownership and engagement. Starting with low bar introductions to your issue, gaining feedback and response, providing opportunities to get involved and eventually asking a supporter to be a part of a campaign is the model we seek to replicate.

Whether it’s in union organizing, political campaigning or issue awareness the Ladder of Engagement is a model we bring to all our work.

Breaking down the steps and building up your campaign 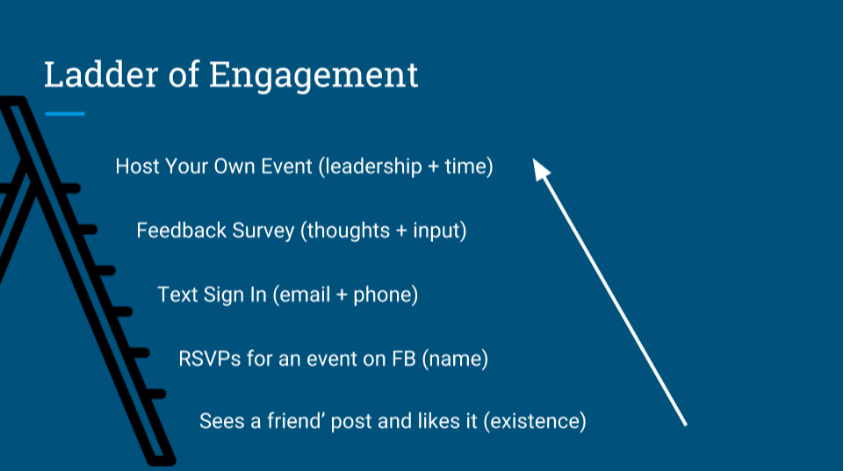 When we are organizing, we want to make sure that we don’t push too hard too fast when someone seems sort of interested in our plan. No, they don’t want to join your board even if they are excited about your cause! We need to listen to what supporters are saying and meet them where they are (physically by bringing our campaign to them, emotionally linking our message to their concerns, and only if they are ready to take on the responsibility you are asking for).

Once you’ve identified your potential supporters, you want to give them multiple opportunities to get further involved in your cause. Whether that’s via social media, door-knocking or texting, the medium of the ask isn’t the focus, the level of commitment is.

Some folks want to donate and leave it at that, others want to put boots on the ground and show up at events and rallies.

Once you’ve seen demonstrated commitment to your cause, it’s time to introduce responsibility. How many people can they recruit for the next meeting? Can they organize part of the next rally? Do they want to organize a phone bank? Would they prefer to have a house-party to drum up financial support? The ask needs to fit, though. Plenty of enthusiastic volunteers have taken on more than they can handle. This is about matching the task to what the supporter can and wants to.

There is a lot more to that final level, having one-on-one meetings with your volunteers, modelling good behaviour and retaining volunteers but it’s important to remember that everyone has a talent to bring to your campaign and it’s your role to find what that talent is, who they are and how they can get more involved.

Hahrie Han wrote that the Ladder of Engagement is “the difference between organizing events and organizing organizers” (2015).

When we’re bringing people into campaigns we want to think about how we can constantly scale up our reach — mobilizing more and more people in order to reach our goal.

If the campaign team keeps thinking that recruitment is their job, bringing new supporters in, then they haven’t been focusing closely on the Ladder of Engagement.

At that top rung, campaigns need to divvy out the work of recruitment and base building to their most trusted volunteers and supporters. By giving that responsibility to volunteers and making it clear that their work is needed they’ll respond with their commitment to the cause.

Ultimately, the Ladder of Engagement is about building leaders.

What rungs make up your ladder?

Has your campaign team, the board of directors or union leadership ever thought of organizing this way? If so what steps are part of getting your members involved in your organization?

Many of us are guilty of the example above, seeing a fresh face and immediately asking them to join the board or attend a meeting. Take time to re-think this approach and engage with new supporters to find out how they want to be involved. Finding smaller roles and opportunities to join will have huge results when it comes to participation numbers.

If you’d like assistance working through your Ladder of Engagement and thinking about interesting on-the-ground mobilization tactics, get in touch.

Read on: Part Two The Digital Ladder of Engagement. 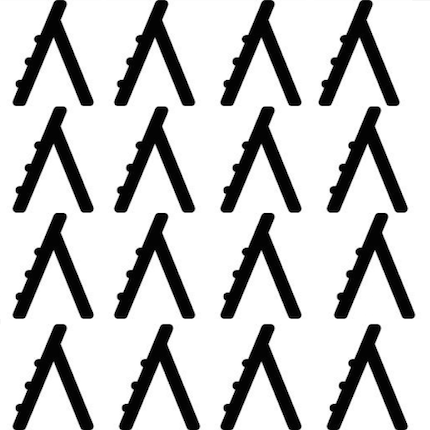